What is Thematic Research ?

At the Hakuhodo Institute of Life and Living (HILL), we have been conducting quantitative surveys on Japanese elderly people (men and women aged 60–74) every 10 years since 1986.

How have the perceptions of elderly Japanese changed over the last 30 years? We analyzed HILL Silver Survey data from 1986 to 2016, along with a diary survey of today’s 60–74 year-olds, to answer this question.

・ Over the past 20 years, Japan has grayed rapidly. With the average life expectancy now over 80 years for both men and women, the landscape facing the aged society has changed markedly.
・ With the diversification of employment forms, better services and information for and about older people, and through caring for their own elderly parents, today’s elderly (for the purpose of this study defined as people aged 60–74) are better prepared for longer lives than the same age group 30 years ago.
・ This has led them to start planning sustainable lives and possess the three characteristics energetic, realistic and independent.

The graying of Japan today

Before we reveal the findings of our study, we let’s take a look at the current state of aging in Japan.
According to a 2015 government survey, Japan’s total population is 127.11 million. Of these, 33.93 million are aged at least 65, or 26.7 percent of the total population. This is the highest percentage of elderly people of any country in the world. Japan is categorized as a super aged society, defined as one where the elderly make up more than 21 percent of the population.

Snapshot of an Aging Society 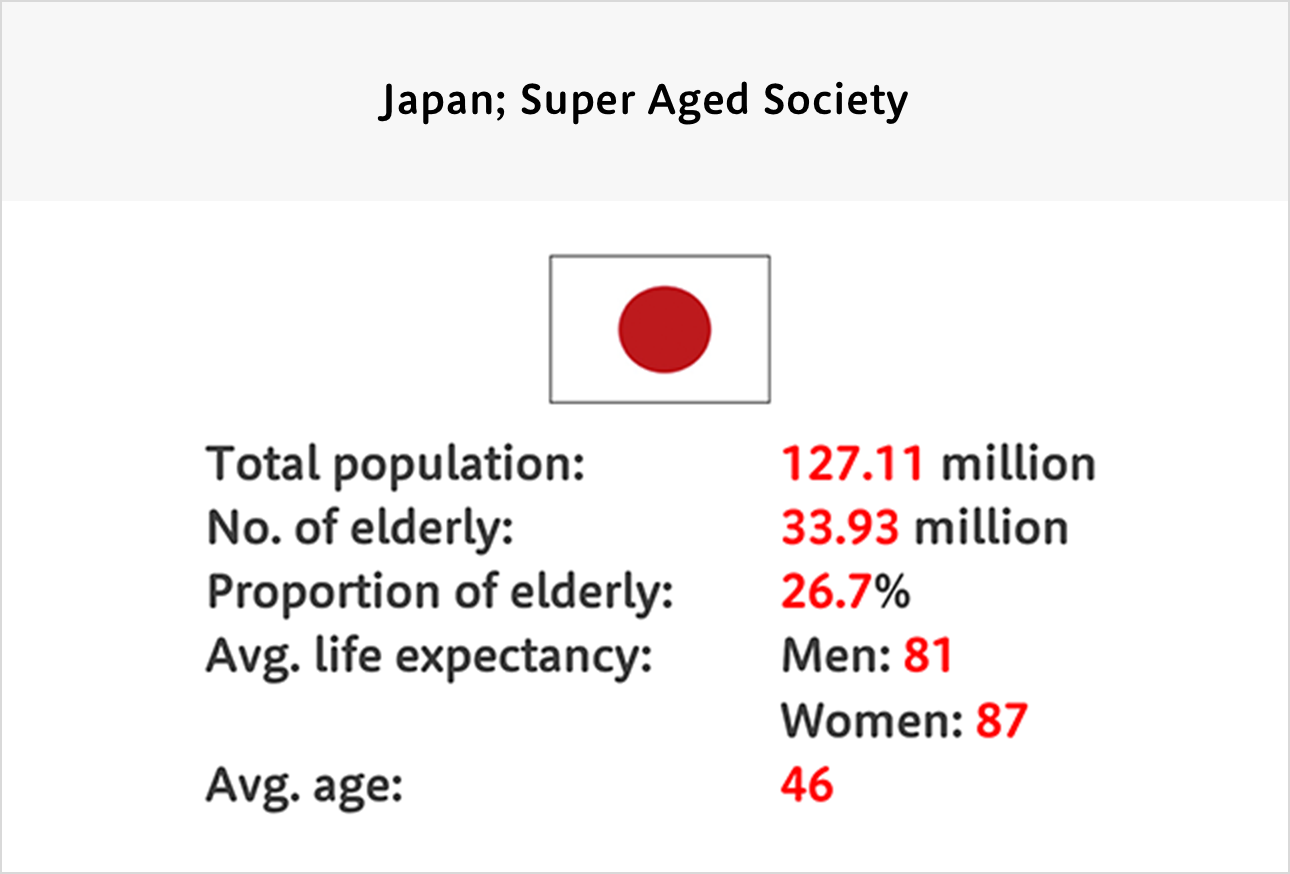 Japan has not always been an aged society. When we conducted our first survey 30 years ago in 1986, Japan had the lowest percentage of elderly people of all developed countries.
Japan’s population aging has soared in the past 30 years. 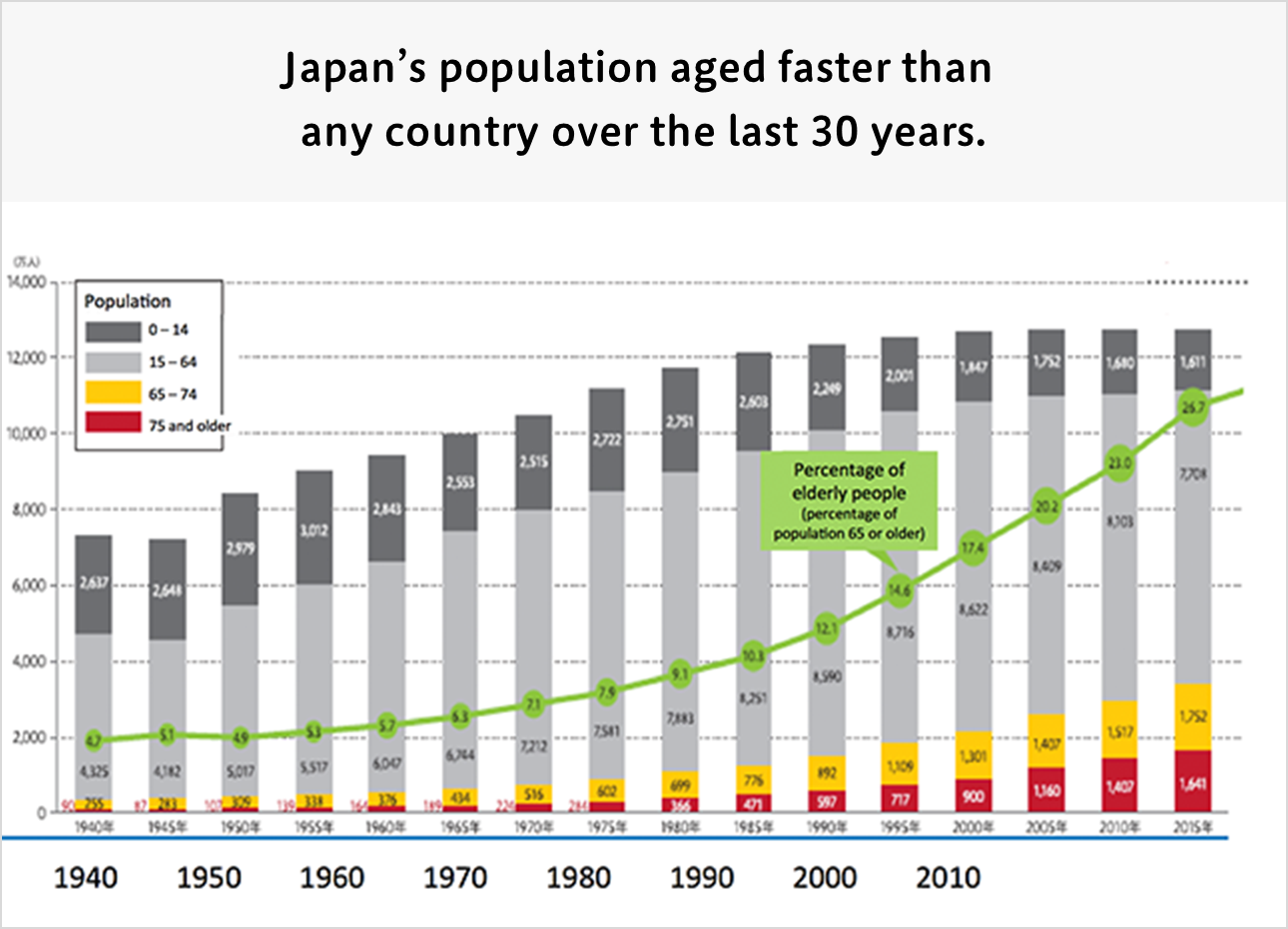 Looking closer at Japan’s 33.93 million elderly people, we find that already nearly half are aged at least 75.
The younger half of the elderly population were born during or after WWII. This generation entered their 60s at the start of the 21st century. These people—the subject of our study—can be called “second generation elderly.” 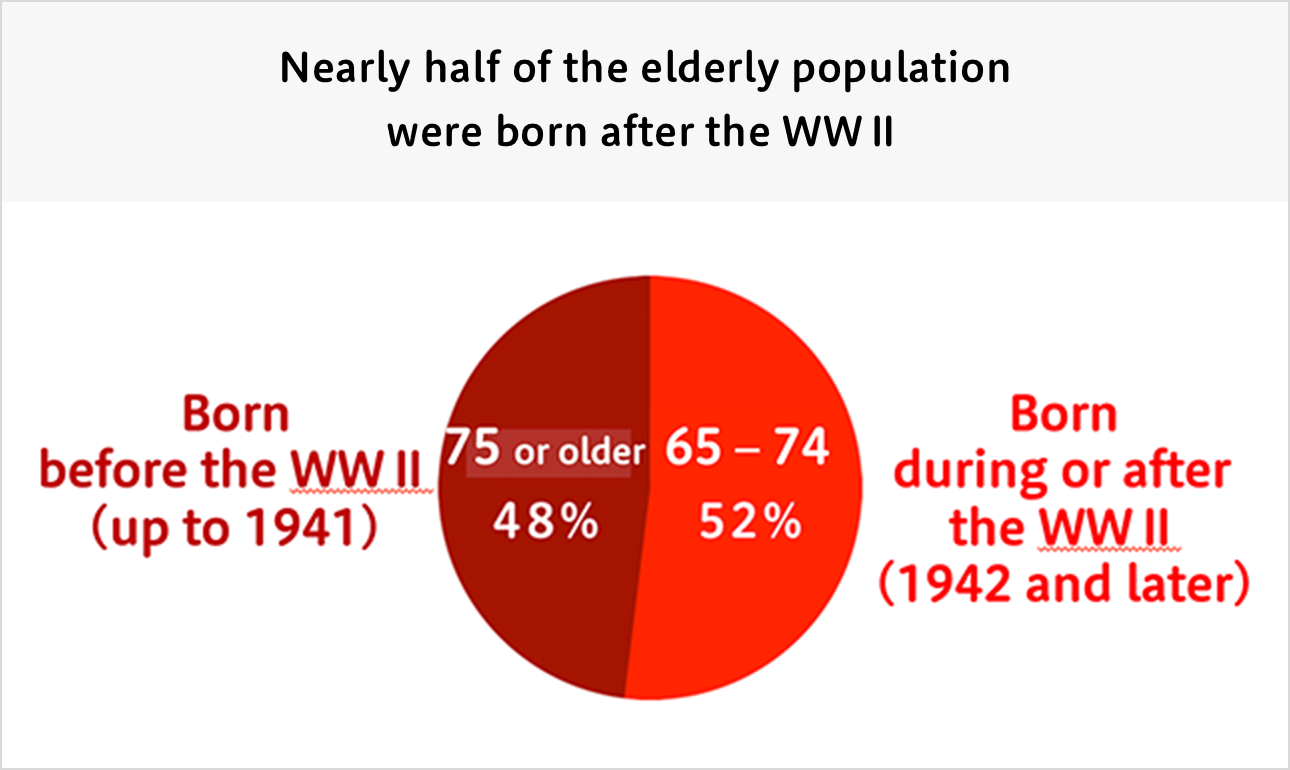 Now let’s take a look at the findings of our study.

Looking at the living arrangements of our respondents, we find that the number of three-generation households—in which respondents live with their children and grandchildren—has plummeted in the last 30 years.
At the same time, those living alone or with their spouse have jumped significantly. 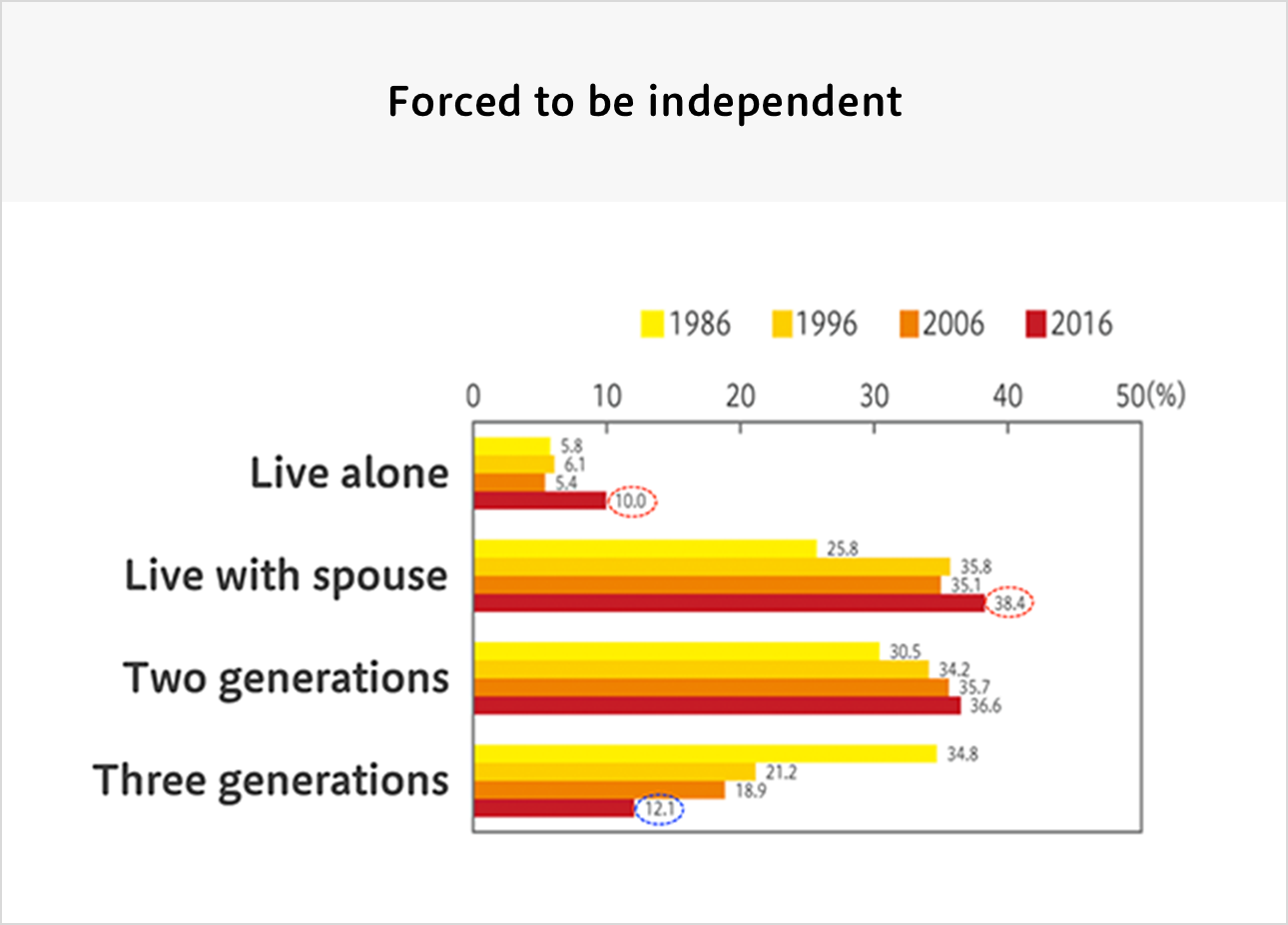 Average household incomes were around 43,770 USD in 2016, the lowest level in the past 30 years.
Under these conditions, most elderly today do not have hopes for the future. 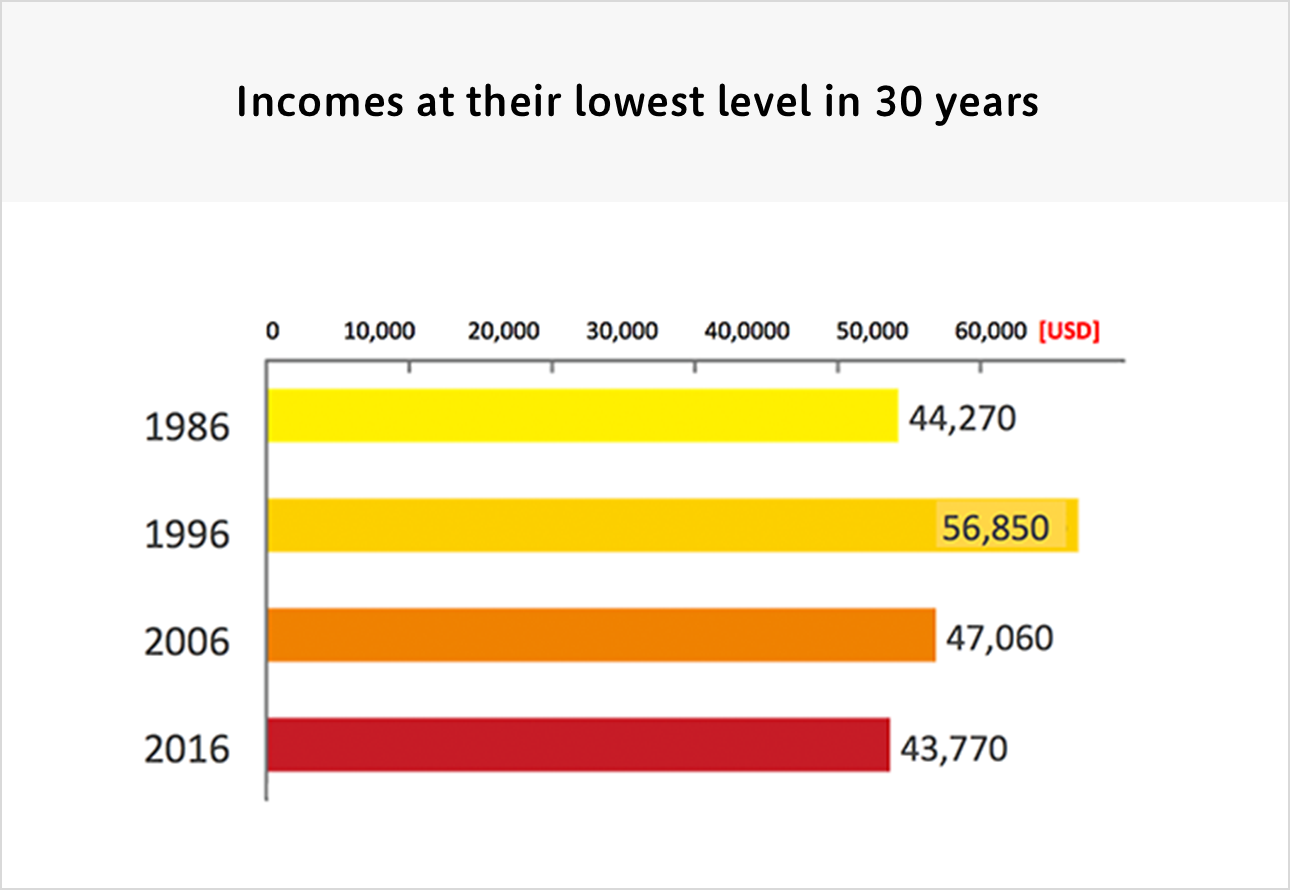 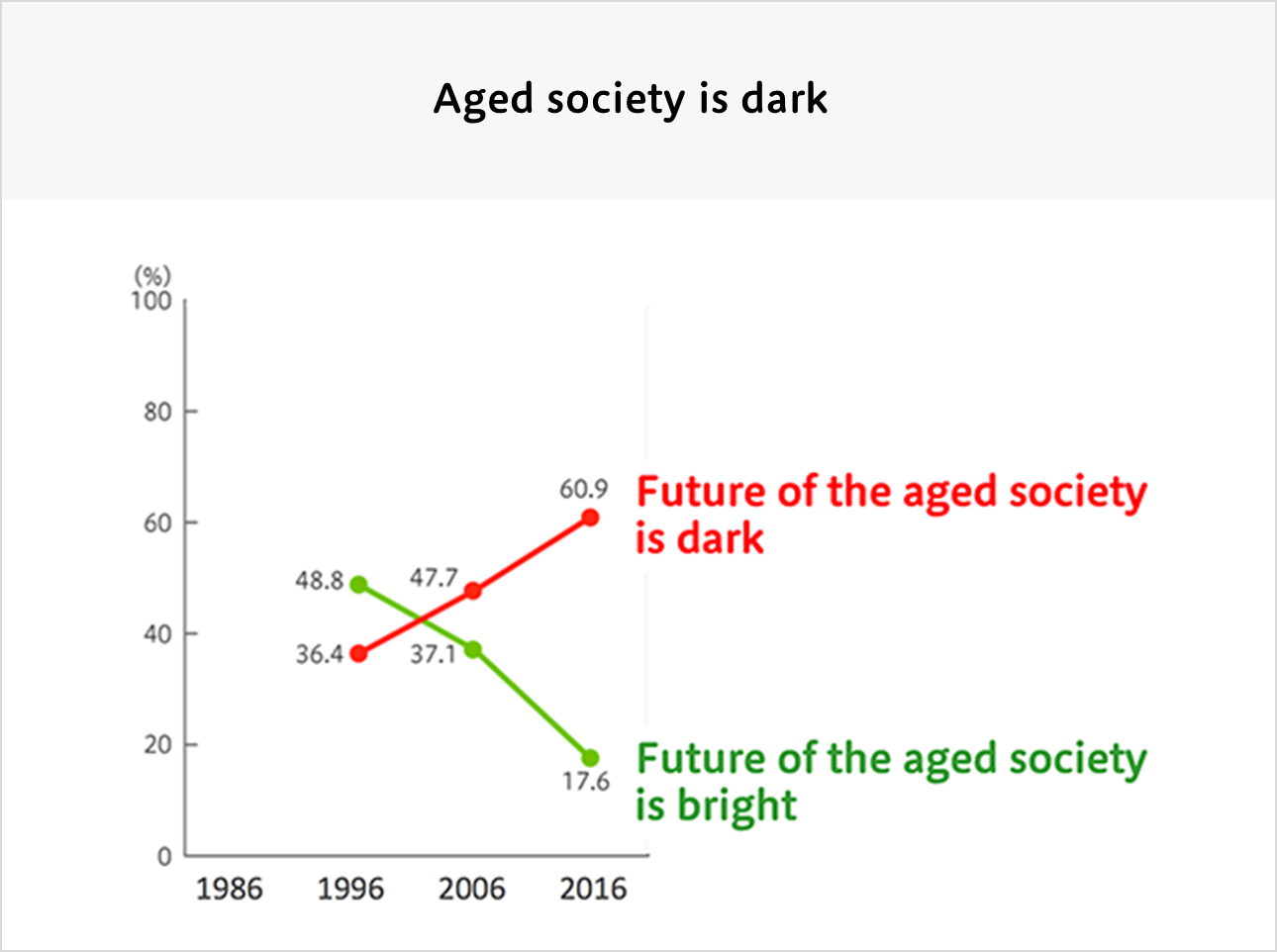 However, going deeper, a picture of a gradually changing elderly emerged.

Today’s 60–74 year olds were educated in a democratized Japan and, thus, have very different values than the generation before them. They have the ability to look rationally at the long years of old age ahead of them and design sustainable life plans.
We have named this group the Sustainably Active Elders.

Introducing the Sustainably Active Elders as revealed by our findings.

When we spoke to these people about their life plans during in-depth interviews, all of them gave quite detailed descriptions of how they will live in the coming years.
Each of them had many things they wanted to do.

Some examples:
• A 68-year-old woman has become so interested in computers that she opened a computer class.
• A man enjoys singing karaoke with his friends at home because singing in a loud voice is good for your health.
• A 63-year-old woman who gives piano lessons said she wants to continue teaching piano until she’s 90 because moving her fingers wards off senility.

Difference between Perceived and Actual Age

We asked the difference between how old people felt they were and how old they really were.
In our most recent survey, the average age respondents said they felt was 53 years old, when in fact their average actual age was 67. This means that, on average, they felt 14 years younger than they actually were.

From a physical standpoint, respondents said they felt they were 60, on average. So physically, they felt seven years younger than they actually were. 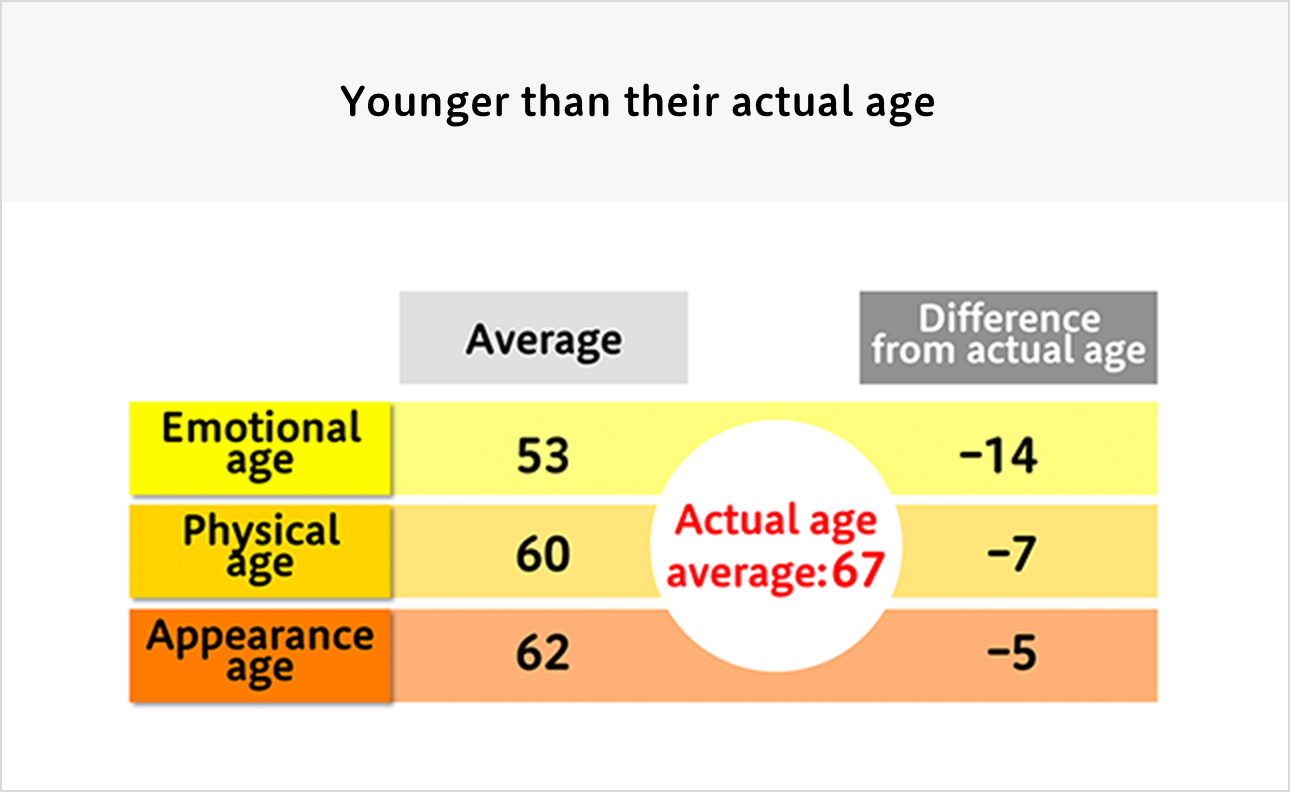 What They Want to Try in The Future

Our survey asked respondents what they want to try in the future.
Over the years, more and more elderly people have answered “I want to join a sports club,” “I want to go out on my own to a restaurant or bar,” and “I want to volunteer.”
This indicates that they are quite willing to take on new challenges. 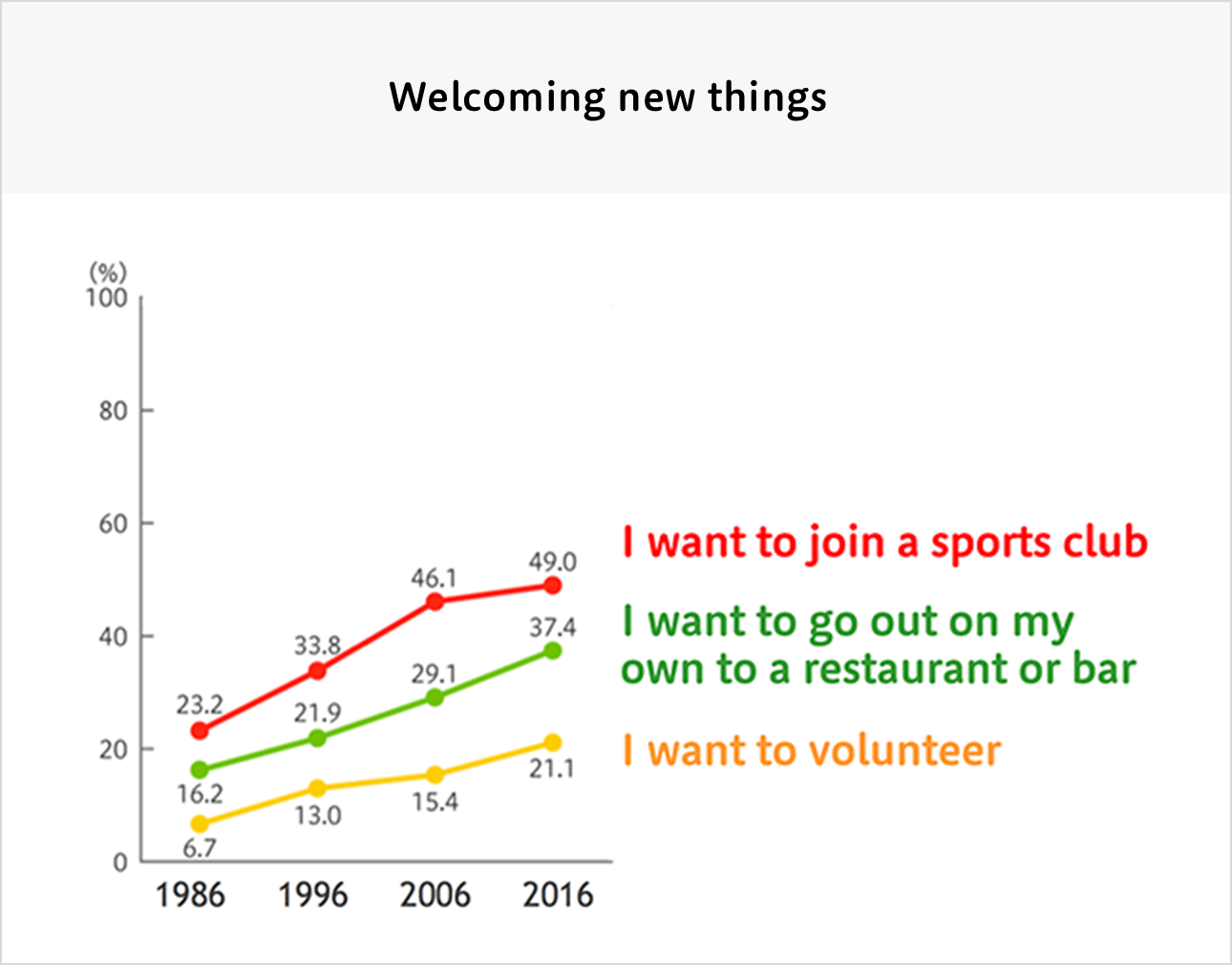 Japan’s economy remains in the doldrums. Many Sustainably Active Elders are dealing with financial worries and are forced to confront a stark reality in front of them.
However, we noticed an interesting change.

When we asked about anxieties in their daily lives, such as about their income and health, we found that anxiety about
15 out of 16 items had decreased.
Despite their gloomy future prospects, anxiety about daily life is decreasing.
We believe that Japanese elderly people’s tolerance to anxiety has grown stronger in the last 30 years. Position of Their 60s in Their Lives

Our survey asked respondents the position of their 60s in their lives.
In the past, many people in Japan viewed hitting 60 as a chance to be free of work and child-raising responsibilities and to relax. 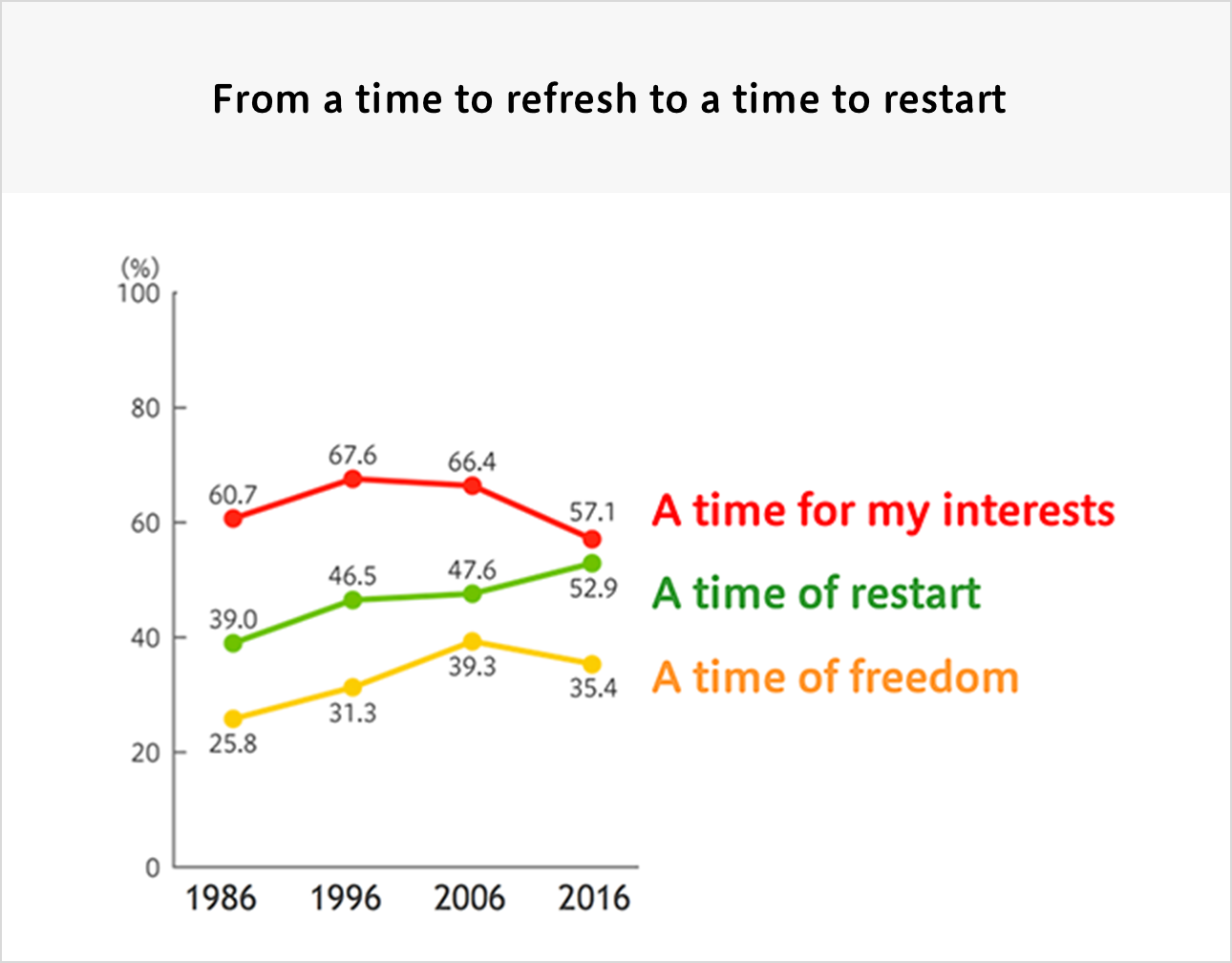 This indicates that Sustainably Active Elders lack not just financial comfort but also emotional comfort.
However, they are using their ingenuity to get through their predicament. An example:
A 62-year-old man simulates his living expenses until the age of 80 in an Excel spreadsheet.
His spreadsheet took into consideration changes in his pension and physical condition, and even how much money he spends on his pastimes.

When we went through 700 respondents’ diaries, we found that many people work part-time jobs.
For example, this 62-year-old man leaves for his part-time job at 7 in the morning.
We had imagined that this group was just barely getting by, but after meeting them in person, we realized our predictions were wildly off base.

An example:
A 62-year-old man has a part-time job moving new cars brought by cargo ship from the ship to the parking lot. We asked him why he chose a job that involves physical labor. “I do it for my health, though for money too,” he said. “Since you’re being paid, you don’t play hooky, right? I’m still healthy thanks to this job.” 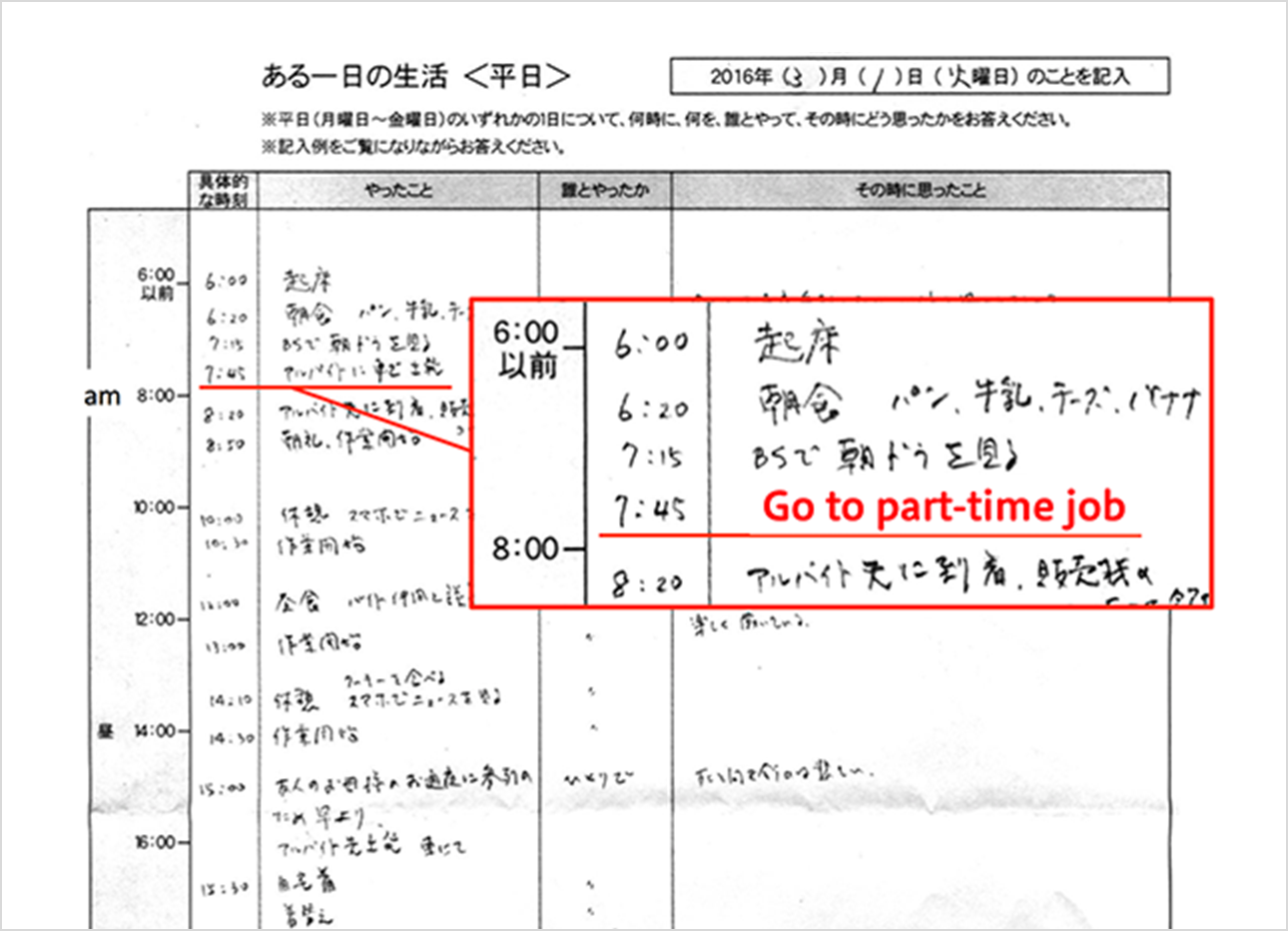 Attitudes to Living with One’s Children

Examining their attitudes toward living with their children, the number who say “I want to live with my children indefinitely” has declined consistently over the years.
Some people do not want to trouble their children, while an increasing number wish to live at ease with just their spouse. 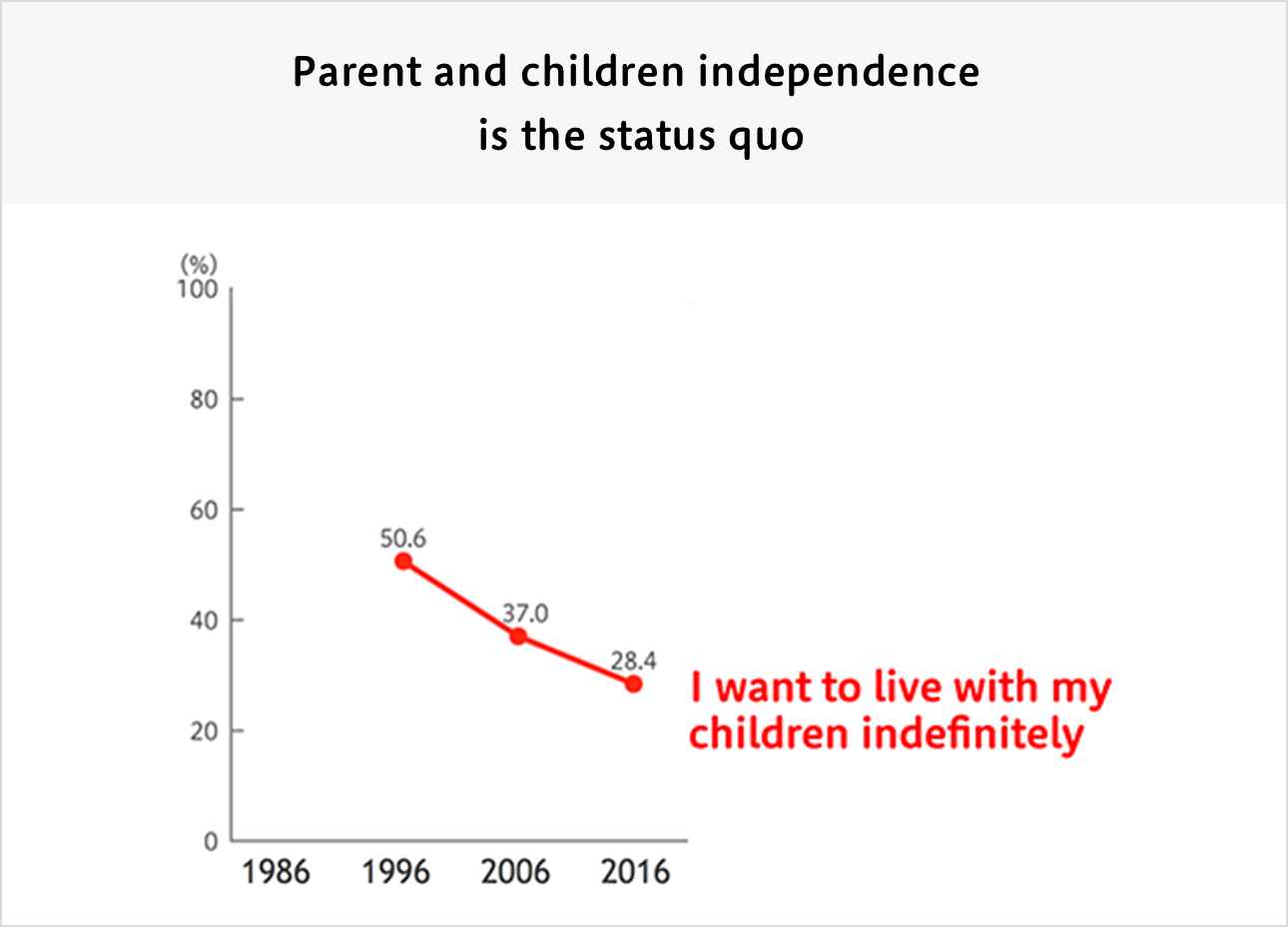 Not only are attitudes toward living with one’s children changing, so too are relations between married couples.
The number of people saying “I want to be interred beside my spouse” and “I want to share common interests as a married couple” has consistently fallen over the years. This result shows that individual-orientation is slowly increasing.
The number of people answering “I often do things on my own” and “I would like to try living on my own” has consistently risen over the years.