What is Mirai Expo?

The Future of Obsession

The biggest motive for doing something is the fact you’re obsessed with it. People lavish time and money on the things they love, and they expect little in return. We at the Hakuhodo Institute of Life and Living (HILL) have been investigating people’s individual obsessions in the belief that they have the potential to restore dynamism to Japan’s sclerotic society.

The Seikatsu Teiten Survey that we run asks people about the outlook for Japan and for their own lives. The percentage of respondents who expect things to remain much the same in Japan has risen markedly over the past few years. The percentage of respondents expecting no change in their standard of living has likewise increased. These findings indicate that people in Japan do not have excessive expectations of society. They think that the future will be neither great nor terrible. 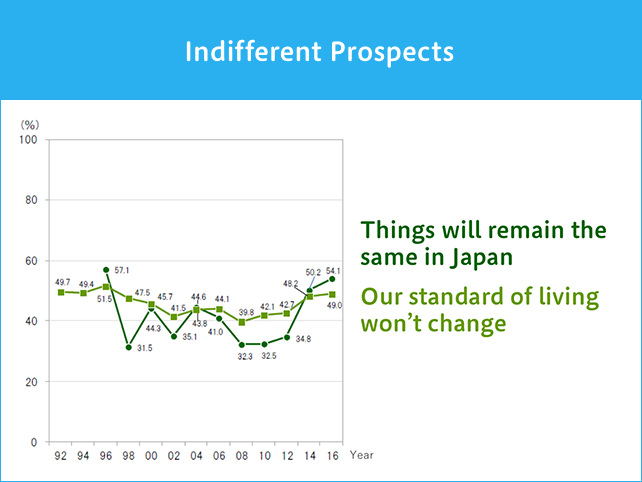 For that reason, perhaps, the percentage of respondents who want to make a difference to society has declined; conversely, the percentage who believe the Japanese should focus more on their own lives than on public affairs has reached its highest level ever. Thus the Japanese have become more inward-looking. But it’s not so much that they’ve become self-centered; rather, they are looking for things to enjoy in their own lives. 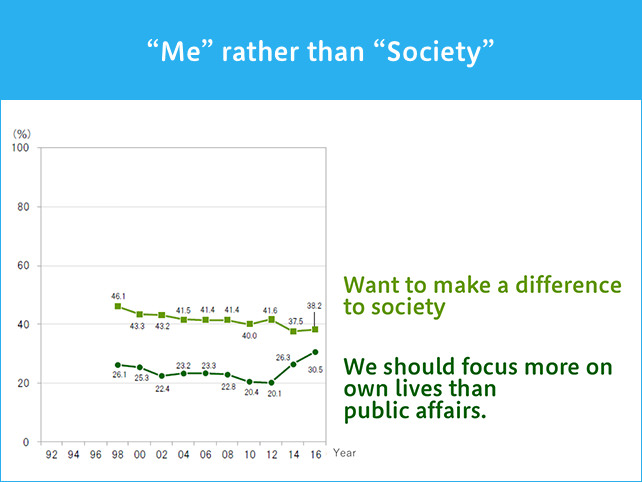 What will happen as people in Japan focus more on personal fulfillment? And can their energy be channeled outward as a means of restoring dynamism to Japan?

The definition of “obsession”

In Japan, children and adults alike love manga, anime, and pop idols. Their interests are truly unique, and so is the way they indulge them. 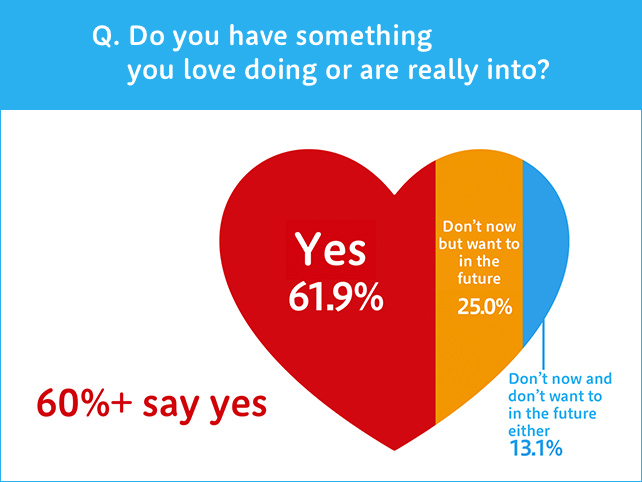 We have been focusing our research on what people in Japan are really crazy about—in other words, their obsession, which we define as people’s passion for what they love and the behaviors it leads to.

Three changes that obsessions are going through

We conducted a qualitative survey asking people how they currently pursued their obsessions and how they wanted to do so in the future. That, combined with interviews with ordinary people and discussions with experts, led us to conclude that people’s obsessions are going through three changes.

(1) Sharing your obsession
Some people don’t just get together with fellow enthusiasts; they may open a store together, hold events, or form a community. We found that some 20% of people fall into that category right now, and their numbers are likely to increase. Instead of pursuing their obsessions in isolation, people will increasingly share them with others.

(2) Creating new obsessions
Almost 80% of people are devising new ways to enjoy themselves, being no longer content with the time-honored ways. And that figure is likely to rise. People won’t just indulge in obsessions; they will increasingly create new ones themselves.

(3) Making money from your obsession
Currently only 14% of people make money from their obsessions as opposed to just enjoying them, but that figure is set to jump dramatically. Indulging your obsession will become a source of income rather than simply a drain on your finances. 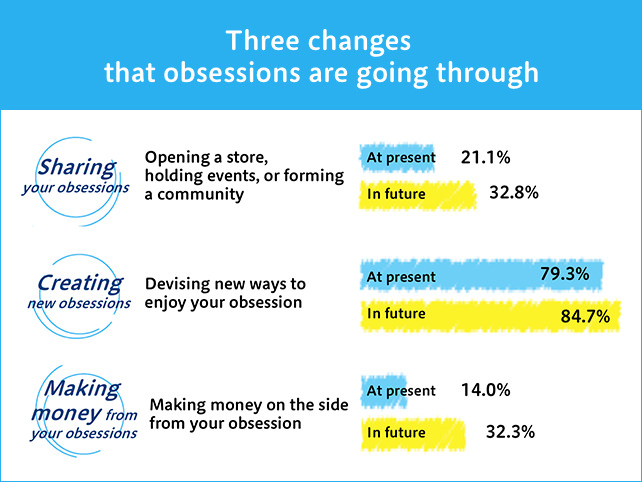 Here are three masters of the art of obsessions who epitomize these three changes.

This guy is so fond of cats that he’s become a collector of cat-themed stuff. When he blogged about it, more and more people started to help him out, until his house ended up becoming a museum. Now he’s even got his own cat show on Japanese TV. 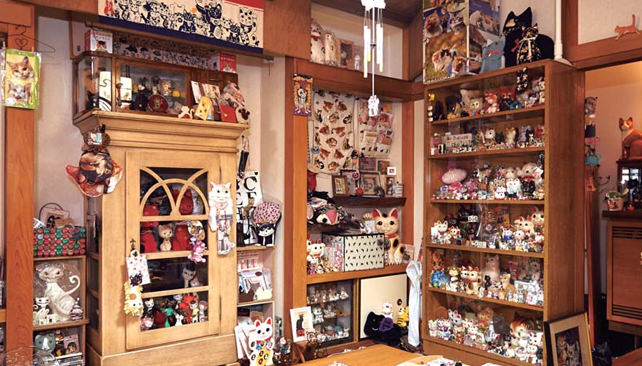 The person here is, unusually for a woman, very fond of camping. But she’s not keen on arduous camps in the wild, so she’s come up with her own unique ideas on ways for women to have fun in the great outdoors without putting too much effort into it, or what she calls “girls’ camp.” Her fellow campers have multiplied online ever since, and she’s ended up working with a manufacturing firm on developing some highly successful no-fuss camping gear for women. 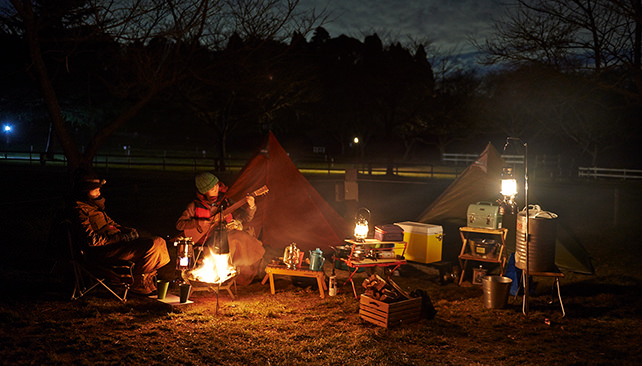 (3) Making money from your obsession: The accidental “origami” artist

This fellow invented a whole new genre of origami in the course of making origami for his kid, who was confined to home by illness. When he shared it on his blog, it caught the eye of an editor, and he published his own collection. Now he’s ended up moonlighting as an origami artist. 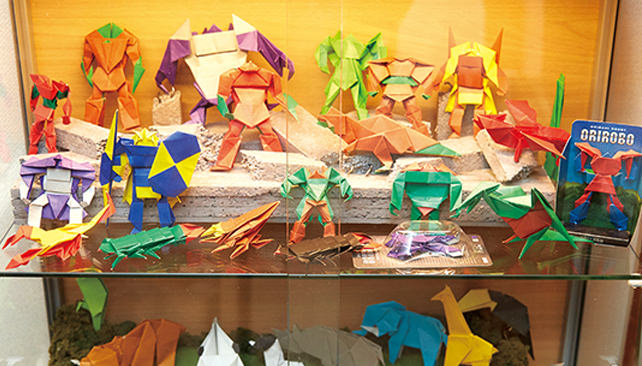 Thus it is becoming more and more common in Japan for people’s personal obsessions to take an unexpected twist and change their lives or spawn a new business.

What will Japan come to look like as these obsessions evolve further? We’ve come up with some bold predictions by letting our imagination run free.

Seikatsu Teiten Survey
A survey of 3,160 males and females (2016) aged 20–69 in the Greater Tokyo and Osaka/Kobe areas conducted in May of even-numbered years (most recently May–June 2016)

Structural Survey of Obsession
A survey of 3,300 males and females aged 15–69, conducted in November 2016