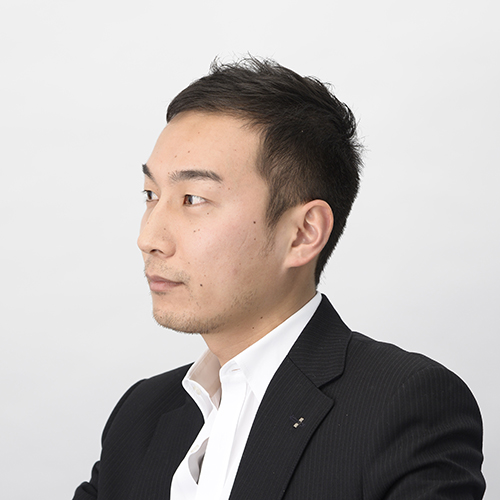 Another year will soon be over. So what was 2016 like for you? Much has happened during the year both here in Japan and internationally, but one event that stands out in recent memory is surely the victory of Donald Trump in the US presidential elections in November.

Trump, campaigning on the slogan “Make America Great Again,” called for the US to withdraw from the Trans-Pacific Partnership (TPP) and restrict inflows of immigrants in order to prevent the erosion of domestic industries and jobs. These positions have been characterized as nationalistic and protectionist. The rights and wrongs of his ideas and policies have already been discussed by numerous media organs and experts, but the truth of the matter won’t be known until he actually takes office on January 20. It is not of course our purpose here to examine their merits. But one thing at least can be said: these positions of Trump’s won over the hearts of a considerable number of ordinary Americans and thus brought about his victory. The underlying factor, it seems, was a mounting sense among the American public that they should put their own country before others.

So what about Japan? Is it only Americans who have this inward-looking attitude that they should put their own country first? Are Japanese unaffected by the trend? Or is the same attitude becoming more prevalent in Japan as well? Here I’d like to examine that question using data from the Seikatsu Teiten survey conducted by the Hakuhodo Institute of Life and Living. 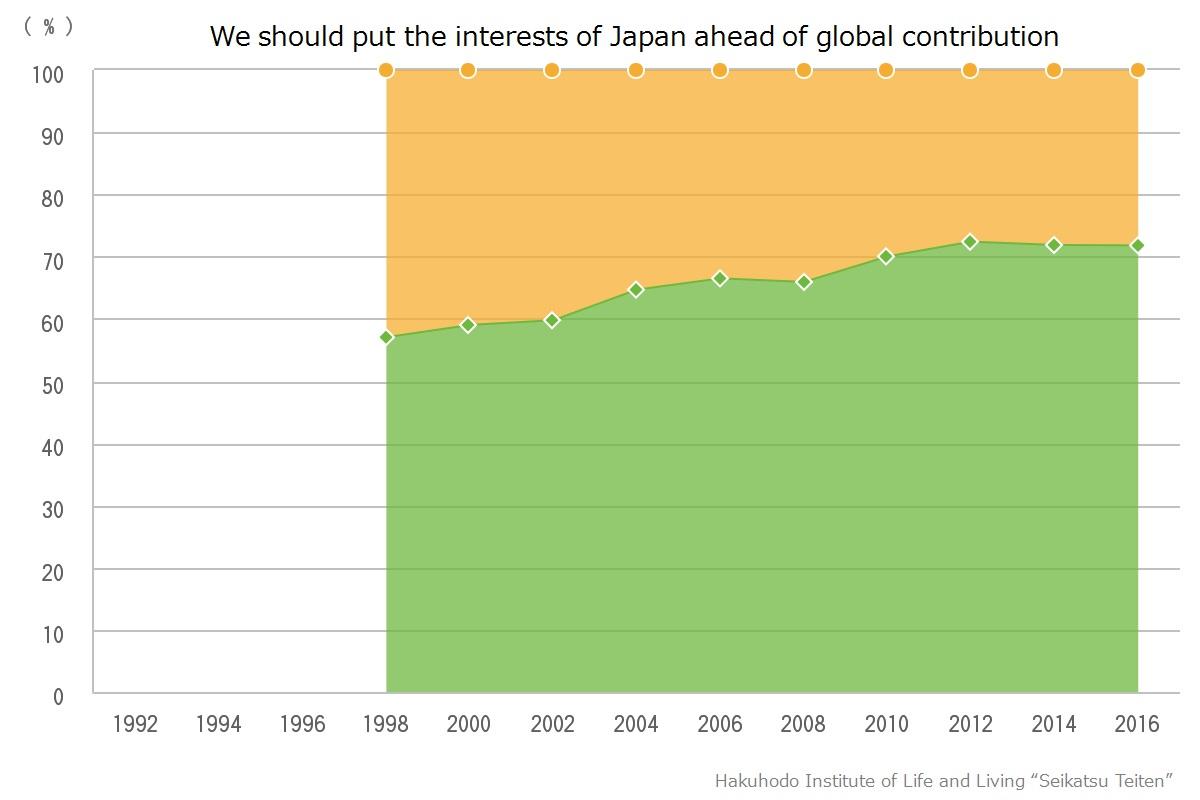 The above graph shows the percentage of respondents who, in the category “Internationalization and Japan,” selected either “We should put the interests of Japan ahead of global contribution” (Japan firsters) or “We should put global contribution ahead of the interests of Japan” (world firsters). When the question was initially asked in 1998, the ratio of Japan firsters to world firsters was around 6:4. Since then the percentage of world firsters has gradually fallen and that of Japan firsters has risen, resulting in a ratio of 7:3 in the most recent survey, in 2016. 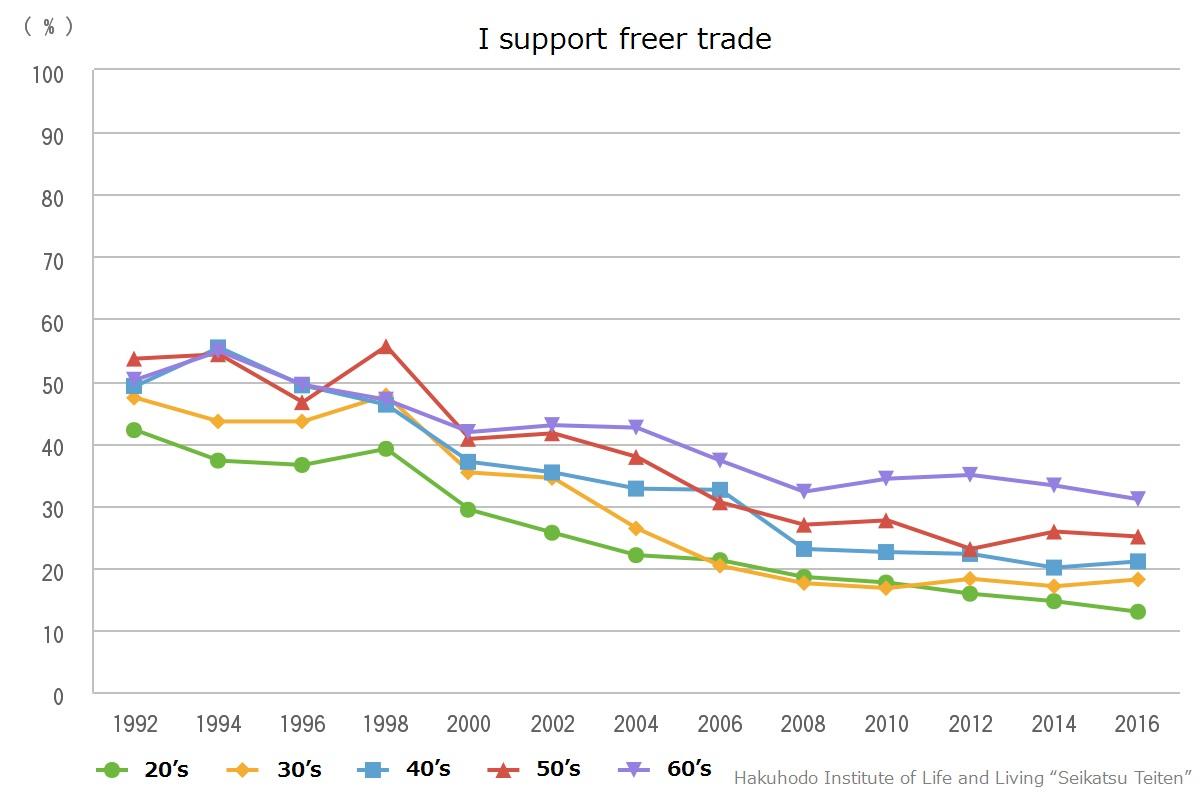 The next graph (above) shows the percentage of respondents who, when asked to select which answers applied to them in the category “thoughts on society,” chose “I support freer trade.” In the 1990s slightly fewer than 50% chose that answer, but that number has gradually declined since the 2000s, hitting a record low of 22.0% in 2016. By age group, that answer was chosen by 31.0% of those in their sixties, 9 points above the overall percentage, but conversely only by 12.9% of those in their twenties, 9 points below it. That suggests that the younger you are, the less likely you are to favor freer trade.

This graph shows the percentage of respondents who, in the same category “thoughts on society,” chose the answer “I think Japan should take in immigrants.” When that question was first asked in 2014, the percentage was 10.6%, which figure declined slightly to 8.5% by 2016. Since of course the United States and Japan differ in the circumstances in which they find themselves and the immigration issues they face, the two are not wholly comparable. Still, these numbers indicate that Japanese are not very enthusiastic about accepting immigrants either.

Thus examining people’s attitudes over the long term reveals that in Japan, too, the idea that you should put your own country’s interest ahead of making a global contribution has, along with skepticism about free trade, been gaining ground, albeit gradually, while lately a reluctance to take in immigrants has manifested itself. The 1990s witnessed much debate in Japan about beefing up the country’s international role, including peacekeeping, expanding aid to developing countries through official development assistance, and establishing a WTO-centered framework for free trade; but enthusiasm for such policies has gradually dwindled in the aftermath of economic crises like the burst of the bubble and the collapse of Lehman Brothers, coupled with massive disasters like the earthquake and tsunami that struck northeastern Japan in 2011. As I examined the data, it seemed to me that with times being tough, people in Japan had become more and more focused on protecting their own livelihoods above all.

During the first half of 2016 there was another big surprise, the British vote to leave the EU; in that referendum too immigration and refugee policy and the national interest figured as prominent issues. Next year a series of presidential and legislative elections are to take place in Europe — in the Netherlands, France, and then Germany — and putting one’s own country first is shaping up to be major theme in all of them.

In 2017, how will people in Japan and elsewhere envisage the future of their own country? And what will they expect of their national government?