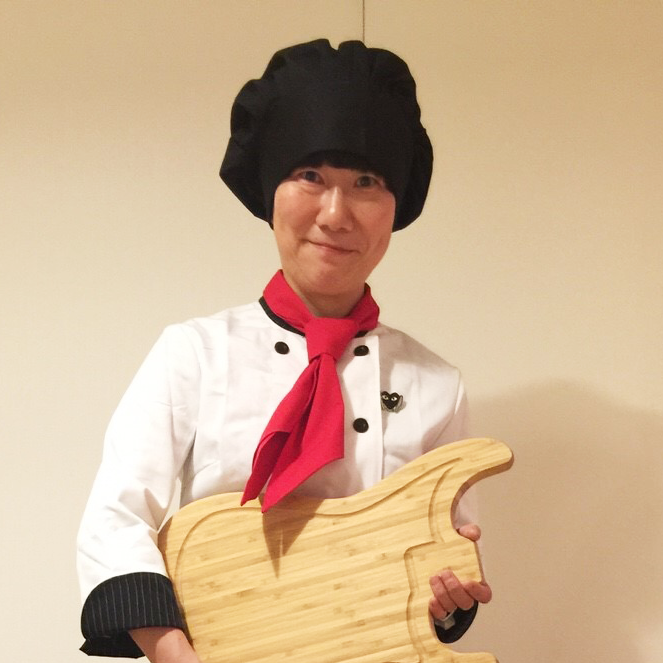 Hello, I am Akemi Natsuyama of Hakuhodo Institute of Life and Living (HILL), where lately we have been researching The Future of Obsession. The HILL website features lots of articles on the subject of people’s likes. So for this installment of Seikatsu Teiten Survey–My View, I have decided to examine an aspect of the survey that relates to one of my own passions: food. At work I’m a sei-katsu-sha researcher; in my own time I’m a gastronome. I try out different restaurants, and when I come across a dish that really appeals to me, I concoct my own version of it (just an imitation: recreating it exactly is beyond me). I sometimes like to invite friends over and treat them to my home cooking. At these dinner parties I set up a blackboard with the menu written on it and dress up in my own chef’s outfit. So I’m a real culinary aficionado.

The declining popularity of Japanese-style cuisine

At one restaurant I happened to sit next to a fortyish-looking couple and overhear them talking about how they seldom ate Japanese food anymore. “Is that so?” I thought to myself. I am a bit of an omnivore myself, but I started wondering what other people ate. So I reached for my smartphone, searched1 “Seikatsu Teiten, food,” and came across the item “I like Japanese-style cuisine.” I promptly took a look.

In every age group from the twenties to the sixties, the percentage of respondents in that category has steadily fallen. And closer examination reveals that the decline is particular steep among those forty and above — the very people you’d expect to prefer Japanese-style cuisine — with a 20-point decrease since 1998. If anything, Japanese food is holding its ground better among twenty- and thirty-somethings.

Despite the addition of washoku (traditional Japanese cuisine) to UNESCO’s Intangible Cultural Heritage list in 2013, it appears that the Japanese themselves have come to prefer other foods. And what foods are those? Let’s examine some more data.

Among people’s top three favorite foods, sushi has consistently placed first for twenty years since 1996. Sure, the term sushi covers quite a range — sushi at the counter, conveyor belt sushi, takeout sushi — but at any rate, this quintessential Japanese food is Number One. But you have to wonder why sashimi, one of the ingredients used in making sushi, has slipped from second to third to fifth place. 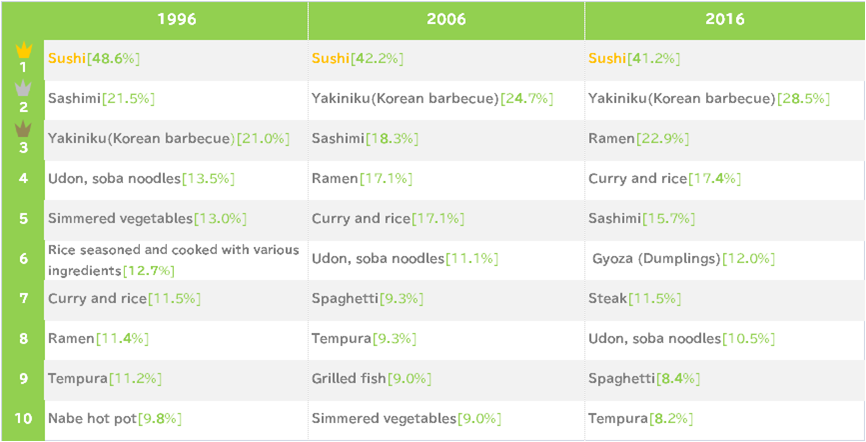 To analyze things further, I downloaded the Seikatsu Teiten data,2 created a ranking table, and added some color. This revealed that the culprit behind sashimi’s decline was yakiniku (grilled meat), which had ousted it completely. All I did was color a few cells, but that was enough to highlight the relative popularity of the two foods. This is fun, I thought; let’s try it with other foods. 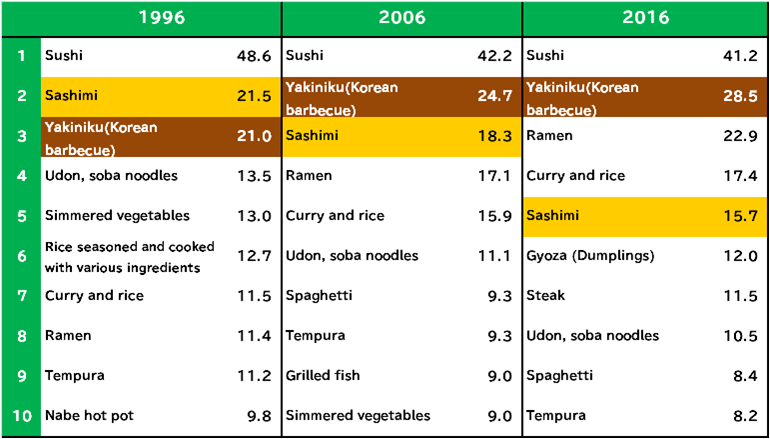 Ramen made the top three in 2016. In fact, it has been steadily moving up the rankings. Twenty years ago udon and soba placed higher than ramen, but ten years ago they reversed positions. As of 2016, ramen is twice as popular. 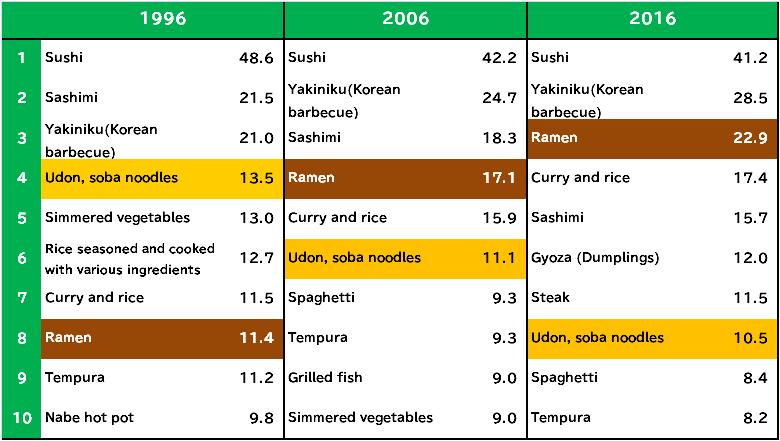 Rice may be an indispensable part of the Japanese diet, but traditional Japanese rice dishes like takikomi gohan (rice seasoned and cooked with various ingredients) disappeared from the Top Ten a decade ago. On the other hand, Western-style rice dishes have become all the rage, curry and rice most prominent among them. There are now loads of dishes in Japan with the English word “rice” in their names: om rice (rice wrapped in an omelet), hayashi rice (rice with hashed beef), taco rice, Turk rice, etc. 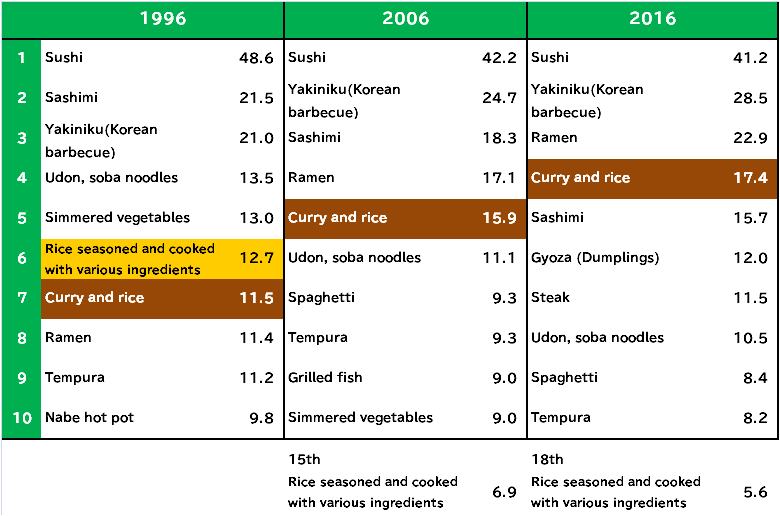 Foreign foods and the browning of the Japanese diet

Finally, I highlighted all the dishes that are not Japanese, which pointed up how foods of Western or Asian origin have been gaining in popularity. Six of the top ten dishes in 2016 were from abroad. The increase in foreign tourists visiting Japan has been a hot topic in recent years; as it turns out, a similar influx has been occurring in the nation’s dining rooms. Now take one more look at the highlighted foods. Yakiniku, ramen, curry, gyoza: they’re all brown. The Japanese diet is literally changing color under the impact of meaty, greasy brown foods, hence the title of this column. 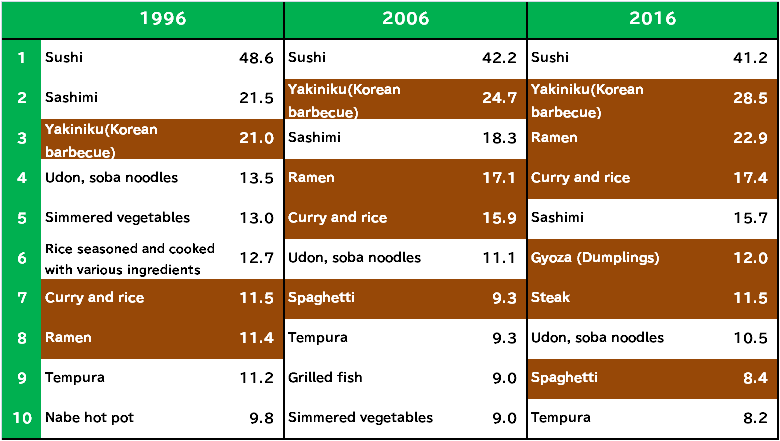 Will the browning continue as working couples and single households increase?

One noteworthy thing about all these brown foods is that they are often eaten at restaurants. They also frequently come in vacuum-packed, instant, or frozen form. In the Seikatsu Teiten survey, the percentage of respondents who prefer eating meals at home to eating out has fallen as the browning of the Japanese diet has progressed, while the percentage of respondents who often eat ready-to-eat foods has conversely risen. The number of Japanese opting for restaurant or prepared meals is steadily increasing.

While these developments can be interpreted in various ways, one major factor behind them, I believe, is the increase in working couples and single-person households. In 1992, around the time Japan’s economic bubble collapsed, the number of two-income households started to exceed that of one-income households. In 2007, for the first time in Japanese history, there were more single-person households than traditional households consisting of a couple with children. Eating out or buying ready-to-eat meals is convenient for working couples who are both busy and for people who live alone for whom preparing meals for one takes too much time, effort, and money. That, surely, is why lovers of brown foods have increased. If that’s indeed the case, the browning of the Japanese diet, being part of a larger social shift, may be irreversible. If anything, it will only become more marked. 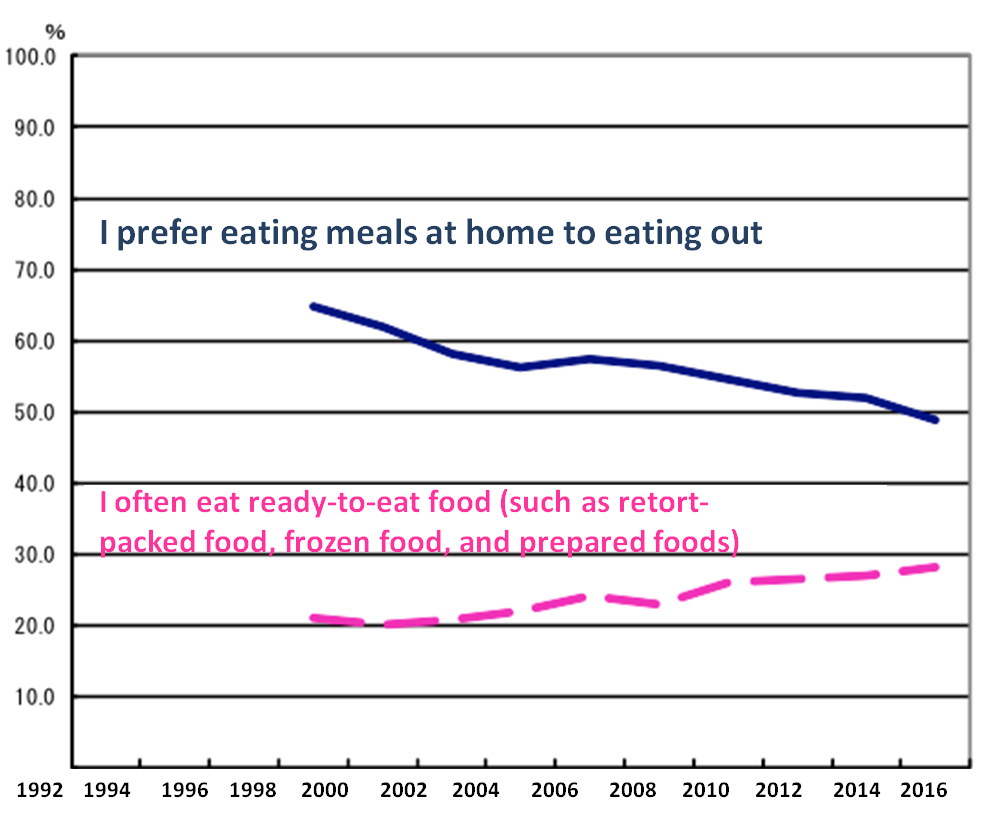 Cooking is a creative endeavor, so be daring

One day at the company cafeteria, the choices on the menu consisted largely of meaty, greasy brown dishes like curry with deep-fried breaded ground meat, udon with miso-flavored ground meat and natto (fermented soybeans), and deep-fried karaage chicken. I too am fond of such dishes, because I can’t work on an empty stomach.

On the other hand, traditional Japanese cuisine is something to treasure, and it would be nice to enjoy it regularly too. To protect Japan’s culinary heritage, it would be great if there were casual eateries that served it at a reasonable price, so it wasn’t quite so intimidating. What if, for example, restaurants set aside a pair of chopsticks and a rice bowl for your exclusive use? Let you try your hand at mixing rice-bran paste for pickling? Invited you to bring along seasonal ingredients and made whatever you wanted with them? A fusion of Japanese-style and brown dishes might be another idea. Seikatsu Teiten certainly fires up the imagination.

In our latest research on the future of favorite, we have forecast that people will increasingly invent new ways of enjoying themselves by thinking outside the box. Cooking is supposed to be a creative endeavor. I for one plan to be more daring in the kitchen, without sticking to any particular cuisine.

NOTES 1. The on-site Search feature is handy when searching for a particular item in the Seikatsu Teiten survey. You may also come across what you’re looking for simply by using a search engine.

NOTE 2. Once you download the Seikatsu Teiten data, you can process it how you like. Besides the overall results, there’s also data classified by sex and age group. You can use the data however you want — for a business proposal, in internal company documentation, to share on social media — as long as you clearly cite the source (Hakuhodo Institute of Life and Living Seikatsu Teiten survey).